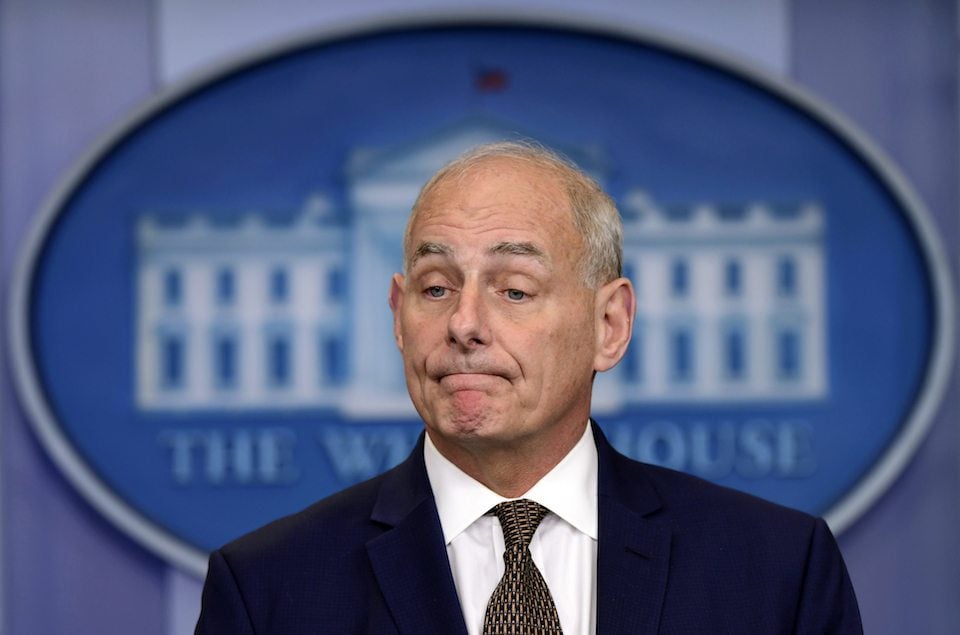 White House chief of staff John Kelly deliberately smeared a congresswoman with an ugly lie and is refusing to apologize for it.

Choosing optics over honor, the White House decided last week not to have chief of staff John Kelly apologize for smearing a congresswoman because doing so would have meant “extending the story,” according to a new report in The New York Times.

Instead, Kelly has remained silent, refusing to acknowledge that he fabricated a story about Rep. Frederica Wilson (D-FL) during his appearance inside the White House press briefing room. Kelly was sent out to try to deflect mounting criticism over Donald Trump’s botched and belated attempt to reach out to families of the four fallen U.S. troops who died in an ISIS-led ambush in Niger on Oct. 4.

Kelly’s tall tale has been proven to be utterly baseless — by video and local press, and officially confirmed as a lie by PolitiFact. Both the Washington Post and The New York Times published editorials urging Kelly to do the right thing and apologize. The women of the Congressional Black Caucus also called for an apology.

But Kelly remained silent, and it was all by design.

“Mr. Kelly was surprised by the criticism of his speech, colleagues said, but he has not apologized to Ms. Wilson for making false statements about her. White House officials said they opted against it to avoid extending the story,” the New York Times reports.

It’s not clear why Kelly was surprised by the criticism, considering he fabricated a story about a sitting member of Congress — a story that depicted her as a shallow and petty — and slurred her as an "empty barrel."

Also, note that the White House’s rationale for not having Kelly publicly apologize — because it would extend the story — doesn’t add up since Trump himself continued to extend the Wilson for days last week by regularly attacking her on Twitter.

Kelly went after Wilson after she reported that Trump had belatedly called Myeshia Johnson, the widow of Army Sgt. La David Johnson, one of the four U.S. troops killed. Wilson was with the family when they received the call, during which Trump callously told Myeshia that her husband “knew what he signed up for.”

To try to delegitimize her, Kelly told a story about a 2015 speech Wilson gave at the dedication of a new Miramar, Florida, FBI Building. Kelly was at the event and claimed Wilson acted like a publicity hound, bragging about how she secured funding for the project with one phone call to President Barack Obama. He referred to Wilson as an “empty barrel,” claiming he was “stunned” by her behavior.

But Kelly’s story immediately imploded: the funding for the building was allocated before Wilson was even elected to Congress. And a video of the 2015 ceremony where Wilson spoke proved that Kelly’s tale was fabricated.

Since then, the White House has alternately argued that it’s fine if Kelly didn’t tell the truth because he’s a retired four-star Marine general, and it would be “highly inappropriate” for journalists to question his account. White House press secretary Sarah Sanders then suggested Kelly doesn’t need to apologize, even if his “account” of the Wilson speech didn’t match the reality captured in real-time video.

Meanwhile, Kelly’s public smear campaign against Wilson, and his refusal to correct his false statements, has likely helped foster a dangerous atmosphere where the congresswoman is now under threat of physical violence.

By refusing to acknowledge that he invented a nasty story about Wilson, Kelly adds fuel to the fevered resentment that has been stoked on the far right as it targets the black congresswoman.