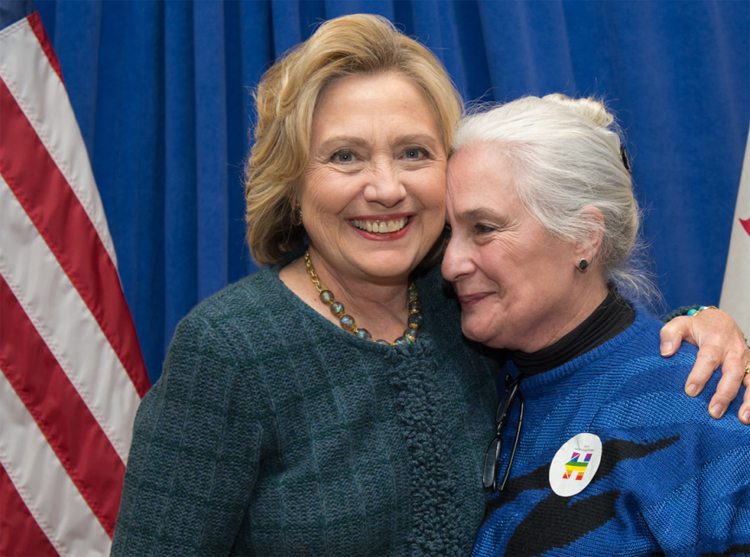 The older women who support Hillary Clinton are enthusiastic for her for all the reasons anyone else is — and for the special and meaningful reason that she validates their lives and has a voice that often goes unheard.

One of the pervasive (and inexplicable) storylines of this election has been that there is "low enthusiasm" for Hillary Clinton.

This is, of course, entirely false. A candidate does not get to be a major party's presidential nominee if they inspire little enthusiasm — and Clinton certainly wouldn't break a 227-year barrier against female nominees if there was no enthusiasm for her candidacy.

One of the ways this narrative has been perpetuated is simply by invisibilizing the evident enthusiasm with which she is greeted at every campaign stop. A browse through her Flickr account shows a campaign that looks very different from what we are typically shown by the corporate media.

It also matters that among her legions of enthusiastic voters are countless older women, whose representation across all media is inexcusably scant.

It is important to acknowledge that Clinton has commanding support from older women — especially Black women.

Older women occupy a very particular space in our culture — a space frequently defined by an abandonment of listening. Rather than valuing the lived experiences of older women, and the wisdom those lives have imparted, we turn away from them, dismissing them as irrelevant; we neglect to listen, just at the moment where they may offer insights most profoundly worth listening to.

In her beautiful essay, "Listening to Old Women," Soraya Chemaly observes: "One day last year, I was thinking about the erasure of aging women in our culture and searched for the term 'venerable women.' I was curious about what images of wise and respected women the world produces. Google’s seemingly baffled autocorrect responded, tellingly: 'Do you mean venerable men or vulnerable women?'"

We cast older women aside — and with them, their voices.

So it doesn't surprise me that there hasn't been much interest in exploring older women's support for Clinton, or what it might signify to them.

Women, of course, are not a monolith. Not all women support Clinton, and not all women who do support her do so for the same reasons.

But among the older women who support Clinton — and, depending on your own age, you may count my 42-year-old self among them — are lots and lots of women who see in Clinton a direct challenge to the habit of tossing away older women, like so much useless rubbish.

Clinton has a voice. And people listen to it. She has experience, which people respect. She has knowledge, and it is widely valued.

This is not the typical experience of older women, who are devalued at the intersection of misogyny and ageism, and whatever other parts of their identity (race, disability, body size, sexuality, gender) are used to devalue us, too.

Witnessing Hillary Clinton, an older woman, fight her way to get into the most exclusive boys' club on the planet, and seeing her succeed, inching ever closer, is exciting. And more than that: It is validating.

Because older women know they have value. It's everyone else who seems to disagree.

Ginger McKnight-Chavers, a Generation X Black woman who is a Texas transplant to New York City, a Harvard-educated lawyer, and one of my colleagues at Shareblue, described her own experiences: "Most women of a certain age like myself have experienced being dismissed, unheard, talked over, passed over, undervalued, and underpaid for our hard work. We know what it's like for people to equate a pleasant demeanor with passivity, and a strong opinion with, well, you know... And then when we reach a certain age, we become forgotten. Without our youth and beauty, we become invisible."

In Clinton, she sees both validation of those past experiences and validation of her present self: "For a mature woman of strength and intelligence to rise to represent and embody the voice of our nation would certainly be inspirational to younger generations of women in ways they may not even imagine. But for more mature women, it would be transcendent. It would bring our voices out of the shadows and in some ways validate that our struggles have been worth it."

Naomi, a 40-something white academic in a red state, agrees: "As I enter my mid-40s, as my time as a 'young' woman is at an end, I am so inspired by Hillary Clinton's determination to keep bringing change into a world that's been yelling at her for nearly 35 years to pack it in and go home. She hasn't — instead she's chosen to continue her life of public service, proving every one of those haters wrong."

She, too, is validated by Clinton's candidacy: "When I see Hillary Clinton in the fight, I see myself, or, at least, what I'd wish myself to be. When I hear her opponent say that she's 'not qualified,' I feel like I'm sitting in a faculty meeting listening to men dismiss my older female colleagues, those women of weighty CVs and considerable experience, for…reasons. Not good reasons, ever. Just reasons."

Catherine Cook, 45, a white woman living in Austin, Texas, expresses similar sentiments about the importance of Clinton's candidacy to her: "It honestly means so much to me to see and support Hillary Clinton in her campaign for the presidency of the United States. I never imagined that in my lifetime I would see a woman president, and I now truly believe that I will. I've never before felt so personally connected to a presidential candidate or felt that a candidate represented my voice, my concerns, my issues, so comprehensively and so well. I've long been a supporter of Hillary Clinton, and the more I've seen of her presidential campaign, the more my admiration for her has grown. She's been an important, inspirational force in my life and her candidacy has been and continues to be a tremendous step forward for women in US politics."

On a grand and very visible scale, Clinton is living out the lives of women of her cohort (and younger). We can see her obliged to navigate the same sort of oppression and sneering and resistance that we experience every day. We know she has navigated it for decades. She can't walk away from it, unless her path is to her bed with the covers drawn over her head, any more than the rest of us can. It is the cost of our womanhood.

And by simply refusing to go away, no matter how many times she's been defeated or faced setbacks, Clinton stands to win the presidency as an older woman. She stands to be one of the most important people on the planet at an age when most women are struggling to be heard, to be seen.

That is deeply moving to a lot of older women, even when they can't begin to articulate what, exactly, it is that swells in their chests when they see her win another debate, listen to her give another speech with a voice cracking from overuse.

It's the pleasure of an older woman being heard. It's the heartbreak of knowing how rare it is. It's the fear that she might not win. It's the thrill that she could.

It's seeing someone who has experienced some of the same things you have — some of the things that have defined you, in the best and worst ways — on the verge of the US presidency.

There has never been a presidential candidate who has experienced life in many of the same ways I have — as a bookish white girl, raised in a Chicago suburb in a conservative religious family, who grew beyond the boundaries of what life was supposed to look like. Who became a feminist. Who doesn’t want to be the only woman succeeding, but one of many. Who will maybe never dance in public with abandon, but will still dance all the same. Who has no poker face.

Who just likes people so much, and wants to listen to their stories.

There are people who don’t feel this way about Hillary, but feel it very strongly about President Obama. He would like them; he would get them, in a way no other modern presidential candidate ever could.

And there are people who have yet to meet (so to speak) a presidential candidate about whom they could feel the same. There are some parts of ourselves, innate or nurtured, so central to who we are that only another person who shares them can possibly be someone who makes us feel that thing, that “I’d have a drink with that person” thing.

In Clinton, we not only got a candidate who advocates for us, but the most qualified candidate in the history of the nation to boot.

There are a whole lot of women who are enthusiastic about that.

It's difficult, because it leaves you vulnerable. And because it elicits the familiar refrain of voting for Clinton just because she's a woman — and because you are.

As if voting for someone to make history isn't a valid reason to vote for them.

Many of us, when we assess candidates, search them to find pieces of ourselves.

There are so many women who see in Clinton some piece of themselves. Some part of their own experience. They support her with enthusiasm, with hope, and with gratitude for making herself heard, for demanding that people pay attention.

Some of us have waited a very long time for this moment. And we have the proportional enthusiasm for any gratification long delayed.