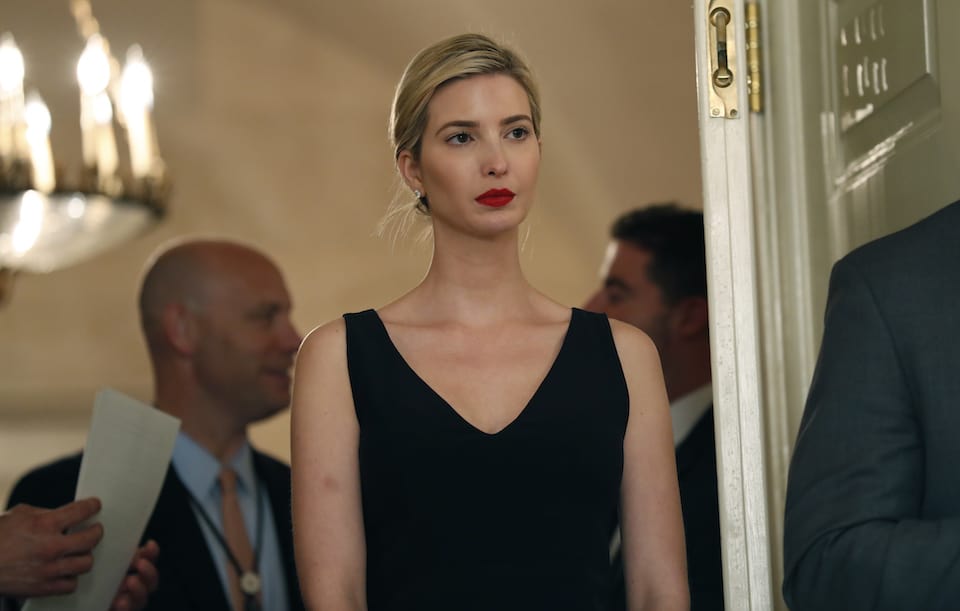 A labor activist investigating the factory that makes Ivanka Trump shoes has been detained by the Chinese government. Now his wife is begging Trump to make a public statement to save her husband's life.

The wife of a human rights activist currently being detained by the Chinese government is asking Ivanka Trump to break her silence in order to "save the entire family."

Hua Haifeng of Chinese Labor Watch was detained by the Chinese government, along with two other men, Su Heng and Li Zhao. The men were investigating working conditions at the Huajian International shoe factory. That company reportedly makes as many 20,000 pairs of shoes for Trump's fashion brand.

The group said it was about to produce a report exposing the Trump-affiliated factory for using low pay and excessive overtime to produce shoes that Trump profits from.

The Washington Post reports that the Chinese government is set to make additional allegations against the activists and accuse them of passing commercial secrets from the factory to foreign organizations.

Since the men have been captured, Trump has not made any public comment about the issue. It has not been referenced on her Twitter or Instagram accounts, which have a combined reach of 7.5 million people and are obsessively covered by the press around the world.

Deng Guilian, Haifeng's wife, told the Post her husband is being held in a cell with about 20 inmates who have been instructed not to speak to him.

"He sleeps near the toilet," she said, "which is very painful and uncomfortable."

Guilian has called on Trump to help secure his release. "For her, it’s just a matter of a few words, but those few words would save the entire family." She added, "I beg her, on behalf of my families too, to be kind and let my husband to come home as soon as possible."

Trump has access to the Chinese government at the highest levels, and news stories have described her as the "secret weapon" to be used as part of negotiations between her father's administration and China.

"Beijing is keenly aware that [Donald] Trump relies closely on a very small group of advisers to guide him on policy issues, including his son-in-law Jared Kushner and daughter Ivanka Trump," said Zhang Baohui, a professor of political science at Lingnan University in Hong Kong.

Chinese state media called Trump the "most influential first daughter" and said her "words and deeds are also believed to carry more weight." The same outlet previously attacked reporting on the poor conditions at a Trump-affiliated factory.

Trump's company was recently revealed to have applied for a slate of Chinese trademarks the day before she joined her father's administration. She has refused to divest from her financial holdings or put them in a blind trust, and remains financially connected to the firm.

The episode is beginning to follow a pattern, in which she is given credit for compassion and being a "moderating" influence, while refusing to use her platform for anything beyond enriching herself and aiding her father's political standing.

The White House, when asked about the detained activists, pointed reporters to the State Department. Asked about the issue, State Department spokesperson and former Fox News anchor Heather Nauert said, "We are urging China to release them immediately and otherwise afford them judicial and fair trial protections to which they are entitled."

But neither Donald Trump nor his daughter have not used their considerable public megaphones to reinforce or amplify the State Department's message — even as a desperate woman begs for their help to bring her husband safely home.