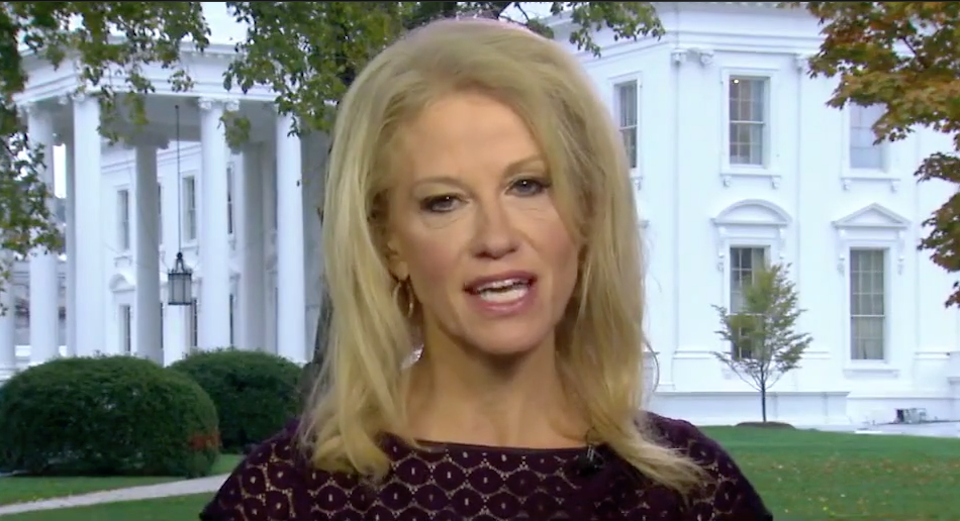 The White House makes clear its priorities, and stopping gun massacres in America is not among them.

After briefly addressing one of the worst mass shootings in modern American history that unfolded in Texas on Sunday, Kellyanne Conway spent twice as much time talking about Hillary Clinton and the 2016 campaign during an interview on Fox news Monday morning.

Claiming as she always does that she’d be “happy to never mention [Clinton] again,” Conway couldn’t resist obsessing over the Democrat while a shocked nation struggles with yet another mass shooting during Donald Trump’s time in office.

The fact that the White House adviser, 52 weeks after the election, still sees the Clinton campaign as being more newsworthy than a mass killing, highlights the warped priorities of a White House that seems singularly obsessed with refighting 2016, instead of fighting the epidemic of gun violence and mass shootings gripping this country.

Of course, Trump himself has already signaled he wants to downplay Sunday’s gun slaughter in Sutherland Springs, Texas, where 26 parishioners were murdered by a convicted wife beater who had no trouble obtaining an AR-15 semi-automatic rifle.

With 26 dead and nearly two dozen wounded, Trump stressed the massacre “could have been much worse,” and that the horrific event was definitely not "a guns situation."

Incredibly, when not obsessing over Clinton, Conway lashed out any anyone who singled out Republicans on Sunday for their complete refusal to try to curb gun violence.

Conway was shocked anyone would “see politics immediately” following a tragedy and would be “pointing fingers” via “tweet storms.” Of course, that’s exactly what Trump did following the New York City terror attack last week, when he blamed, by name, Sen. Chuck Schumer (D-NY) for the killing and immediately demanded changes to immigration policy and announced "tougher Extreme Vetting Procedures."

CONWAY: It’s so beyond any type of reasonable response that anyone should have — why people see politics immediately. It’s just like I said in Las Vegas over a month ago, you had families literally still looking for their loved ones through the rubble and the remains in Las Vegas, running from hospital to hospital. There were people who were injured who then went on to pass away. And yet people are taking to Twitter in the comfort of their very luxurious lives, pointing fingers and as far as I can tell never really helped in between the tweet storms — never helped charities, never really helped people to heal. Never tried to reach across for understanding. So I’m very happy at times like this that President Trump is our commander in chief and the leader in this nation because unfortunately every president has to help heal the nation at different times, different tragedies. But the rush to judgment, particularly by those who just see politics and Trump Derangement in every single thing they do. It doesn't help the victims and it's disrespectful of the dead.

Let's all remember that the next time there is a terror attack, and how a "rush to judgment" is an unconscionable thing to do.