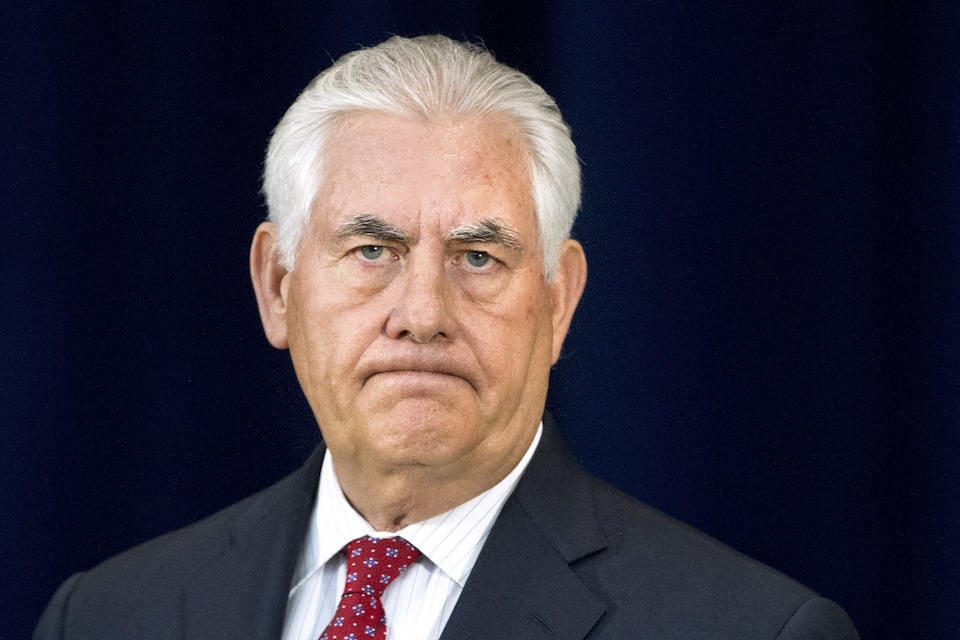 More than 60% of career diplomats have left in the past year, but Tillerson says he doesn't "lose a wink of sleep" over it.

One of America's top Latin American diplomats left the State Department this week after more than three decades of service, joining a mass exodus that threatens to cripple U.S. diplomacy. But Secretary of State Rex Tillerson isn't concerned about the crumbling State Department — in fact, he says he doesn't even "lose a wink of sleep" over it.

Tillerson made the remarks Friday, the same that John Feeley, the U.S. ambassador to Panama, boarded a flight to head back to the states after resigning from his post. Feeley's departure comes less than two weeks after America's top diplomat to North Korea announced his resignation from the State Department.

After serving in both Democratic and Republican administrations, Feeley said he left the State Department when he realized he could no longer carry out his oath under a president whose policies he can't promote or even explain.

Instead of diplomacy, the State Department now endorses "foreign policy by ultimatum and by intimidation," Feeley said, noting that the approach displays the "rank amateurism" of the current administration.

Since Trump took office, Feeley says his work as an advocate for human rights and democracy has been diminished and undermined, leaving him with no choice but to resign.

"The whole idea of a rules-based, respectful conduct of diplomatic relations is pretty much what I spent my whole career doing. And we don’t do that now," he told the Washington Post. "We’ve walked off the field. Not only are we walking off the field, we’re taking the ball and we’re throwing up a middle finger."

Feeley is the latest in growing list of career diplomats who have left their positions after trying, unsuccessfully, to keep doing their jobs even as the administration made it clear that diplomacy is not a priority.

According to a report released in January, 60 percent of the State Department’s top-ranking career diplomats have left since Trump took office, and the number of people looking to join the foreign service has fallen by half. Some of the departures were voluntary, while other diplomats were forced out.

More than a year into Trump’s presidency, the State Department still has at least 41 embassies without confirmed ambassadors.

But Tillerson, who has overseen this mass exodus, flatly admitted this week that he doesn't care about the implosion of the institution he is supposed to be leading.

“I don’t lose a wink of sleep over the fact that we may not have our nominees in” open positions, Tillerson said Friday. He also claimed that the vacancies are not having a negative impact on the State Department's work — a remark that suggests he doesn't even grasp the gravity of the situation.

This is par for the course for Tillerson, who has spent the past year dismantling the State Department and undermining its mission. Shortly after he stepped into his role as Secretary of State, Tillerson told employees that they shouldn't let things like human rights create "obstacles" to the pursuit of U.S. interests.

Tillerson's disregard for the role of diplomacy reflects an attitude shared by many officials in the Trump administration — and it's one that starts at the top.

Amid the chaos of his presidency, Trump's disdain for American institutions and diplomatic practices has been a remarkably consistent feature.

Just this week, Trump bypassed the State Department in the process of announcing a haphazard plan to meet with North Korean leader Kim Jong Un.

On top of that, because of the thin bench of experienced diplomats at the State Department, concerns have been raised about whether there are even enough experts on hand to engage in serious negotiations with North Korea, which explains why seasoned foreign policy professionals say there is no way Trump will be prepared for the talks — that is, if they even happen.

As the state of U.S. diplomacy declines, there is growing concern among our allies and excitement among our adversaries — but most alarming of all is the fact that this isn't alarming at all to the man in charge.