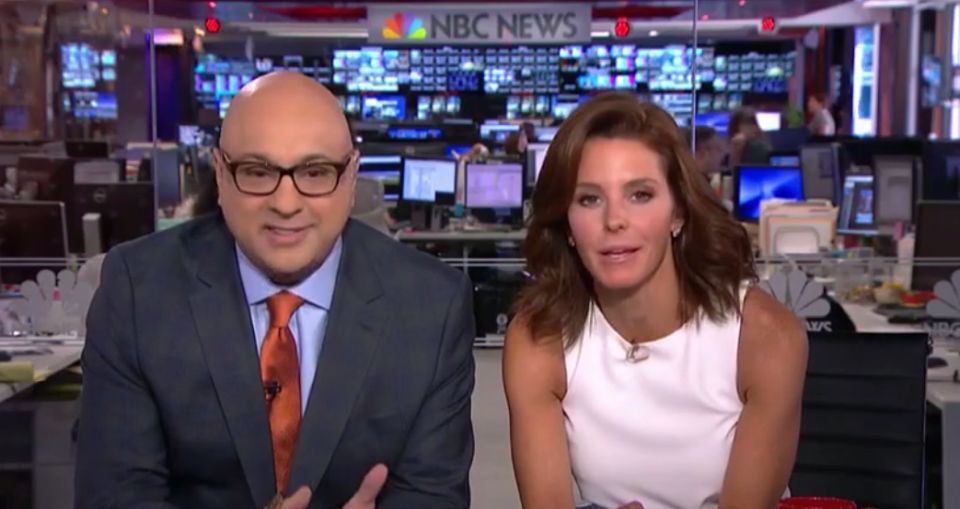 An official with Donald Trump's re-election campaign appeared on MSNBC and immediately begin lying about Trump's economic record. The two anchors, who have decades of financial reporting experience, immediately eviscerated his argument.

MSNBC anchors with decades of experience in financial journalism ripped into a Trump campaign official as he repeatedly distorted economic information and desperately tried to make Trump look good.

Brad Thomas is on the "Advisory Board" for Trump's re-election campaign and has written a pro-Trump book called "The Trump Factor." One reviewer noted, "This book plays up Trump's success while ignoring all the well documented facts how most of his deals came by cheating his suppliers and putting many out of business."

Thomas' loose relationship with the truth popped up in his appearance on MSNBC, where he insisted that Trump had "created over a million jobs" since assuming the presidency.

Ali Velshi, who has reported on financial news for both CNN and NBC, put a quick stop to Thomas' lies.

"Donald Trump is not even close to being the largest job creator in the first six months of his presidency," he said. "Why do you continue to say these things?"

Later, Thomas tried to attack Velshi and his co-anchor, Stephanie Ruhle, by claiming that economics are "not your background."

Ruhle stopped him mid-sentence. "I spent 14 years in investment banking," she said. Velshi added, "You can't just lie on TV."

VELSHI: Donald Trump is not even close to being the largest job creator in the first six months of his presidency. Why do you continue to say these things? […]

THOMAS: I've got a long background in business and I understand the announcement this week on infrastructure, the cost-cutting measures, that are now coming in place is going to stimulate this economy and create jobs. Jobs for everybody. All races. Everybody. And that's really what's important. Yeah, I think that's the most important part of this that again the mainstream media really doesn't recognize, is this job — he was hired — I hired him, I've doubled-down on the president of the United States, because I believe in him. I started writing this book four years ago, nobody knew he was going to run for president, but I've doubled-down on this. I believe he can make America great, and we're already seeing that now. You can ignore these catalysts, but they're there.

THOMAS: Look, it's just very complicated. And I get it, I know this is not your background so it may be hard —

RUHLE: What are you talking about, Brad?

VELSHI: It is far more our background than it is yours.

Trump inherited an economy in recovery after President Barack Obama and Democrats in Congress passed the Recovery Act in the first 100 days of his presidency. Obama's work to pass the legislation, which has added millions of jobs to the economy in the eight years since, stands in marked contrast to Trump's legislative failure.

Trump has been unable to pass any signature legislation in 7 months, let alone his first 100 days, and is wildly unpopular in multiple polls.

His full-throated embrace of white supremacist language and beliefs from the bully pulpit of the presidency has turned off many CEOs and executives at some of the largest companies in America. It is why he will have to rely on fringe figures like Thomas to continue to sell his economic spin, because people with real business reputations won't touch his toxic presidency.

The mainstream press has been far too willing to parrot Trump's claims about economic success, when the real story is Trump is riding on President Obama's coattails and backs economic ideas that would undo the work that has been done.

Trump needs snake-oil salesmen to push his lies, but if other reporters stand up for the truth like Velshi and Ruhle did, it won't work anymore.