Home National 'You lie!' congressman who yelled at Obama has his insult hurled back...
Support progressive journalism.
Donate today 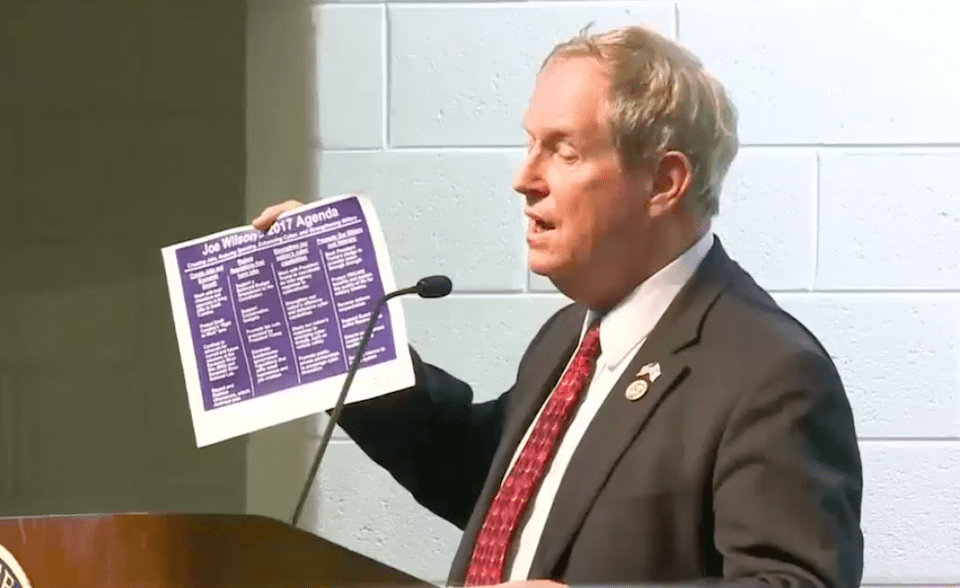 WRDW
Get The American Independent in your inbox

Congressman Joe Wilson, who yelled, "You lie!" at President Obama during a joint session of Congress, had his insult used against him at a South Carolina town hall when he tried to defend the failed Republican attempt to repeal Obamacare.

Rep. Joe Wilson (R-SC), infamous for yelling "You lie!" at President Barack Obama during a joint session of Congress, had his insult thrown back at him at a town hall following the Republican failure to repeal the Affordable Care Act.

Wilson held his meeting with constituents at Aiken Technical College, where he was grilled by voters on his support for the Republicans' repeal plan. The new bill would have ripped health insurance from at least 24 million people, undoing one of the signature achievements of the Obama presidency.

WRDW reported that the audience chanted "you lie, you lie" after Wilson discussed his stance in favor of health care repeal.

WILSON: My concern about Obamacare is that we've already seen skyrocketing premiums, we've seen deductibles become unapproachable to work with. People have lost their doctors, they've lost their insurance, lost their jobs. We can do better.

REPORTER: The South Carolina congressman says the new plan focuses on taking big government out of the picture.

WILSON: By having the ability of buying insurance across state lines, association health plans, by increasing the ability of health savings accounts, we would provide choice that Obamacare simply has not presented.

REPORTER: At one point the crowd using Wilson's own words against him. Words he used against President Obama.

AUDIENCE: You lie! You lie!

REPORTER: While he and other Republicans work for change, it may be a tough sell here at home.

South Carolina native William Leaphart told WRDW that Wilson was "pretty evasive on a whole bunch of issues, especially with healthcare," and noted, "He just gave a whole bunch of different talking points but nothing really new about solutions for people in the second Congressional District."

Wilson was publicly rebuked by the House of Representatives after his outburst at Obama in 2009, in a resolution that said he had engaged in a "breach of decorum and degraded the proceedings of the joint session, to the discredit of the House."

Now he is being rebuked on another matter by his own constituents, and his old words are coming back to haunt him.